Home Amenities I Predict An Earthquake Up In The Air!

The Rise Of Premium Economy

There is no definitive Bible for the regulation of airline cabin classes and without such, the lines between them are point blank blurred. Their evolution has always been led by the airlines priority to meet the growing demands of the customer. The most recent addition, Premium Economy, only adds to the confusion, especially when the variables of what that actually means are on a pretty diverse spectrum. It’s like explaining a modern-day family with half siblings, step parents, 2nd cousins twice removed on your father’s step mother’s side. What does it all mean? This cabin class family of four have an endless array of possibilities, and I personally can’t help thinking it’s only a matter of time before bridging the gap in the market becomes a conveyor belt of catch-22.

So how did we get into this cluster of cabin confusion?

At the inception of commercial air travel in the 1920’s, the seemingly impossible became a reality, but only for the higher echelons of society who could afford to cough up a pretty penny. Unsurprisingly, it didn’t take airlines long to cash in on the masses, developing coach class, which gave the everyday man the opportunity to travel, but at an everyday price which was reflected in the claustrophobic sub -standard service. Entering the 1940s, the socio-economic climate was shifting at top speed and airlines were missing out on an emerging potential customer. These two cabin offerings simply didn’t fit the bill for some.  The middle classes. Economy was too ‘base’ and First class too ‘elevated’. And so, airlines developed Business Class.

Since the golden era of air travel, the commercial sector has soared, adapting to a larger consumer audience along with their ever-growing demands. From package holidays to air miles, to private lounges and top-notch amenities. With the advancement of technology, no time has been better than the present for travelling 30000 feet in the air. It’s a home from home up there above the clouds. 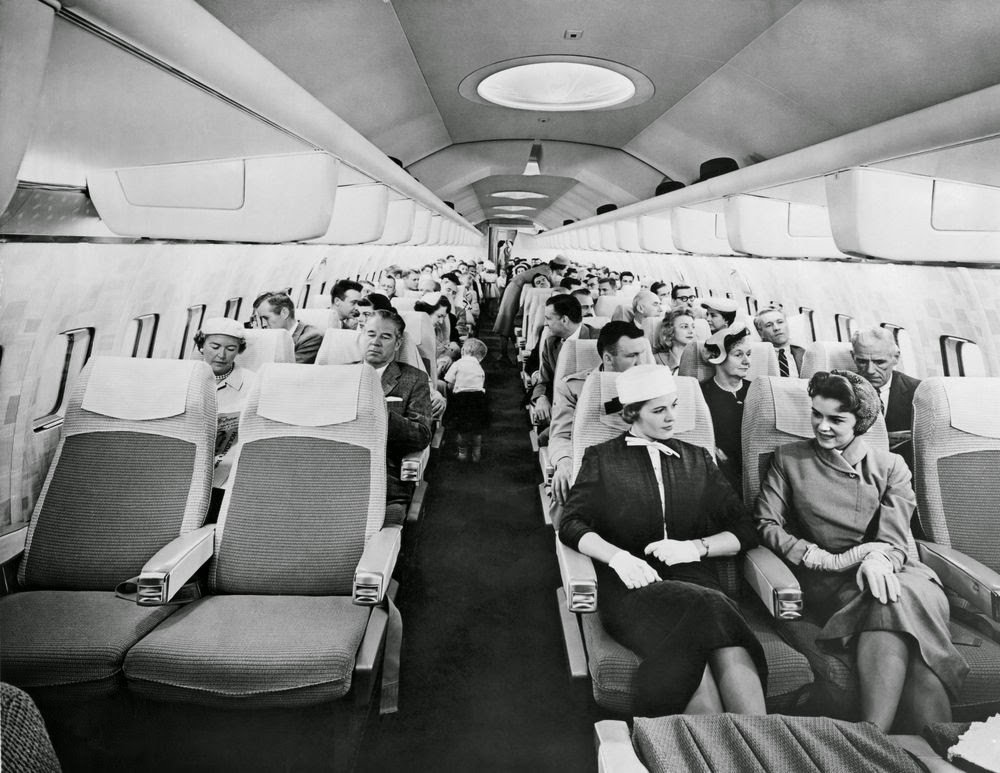 You would think that after just under 100 years of commercial air travel, airlines would have this business pinned down. But with the explosive advancement of technology brings a little tension amidst our cabin class family with the increase of fluidity, accessibility to commodity, and consumerism driving most industry. Amongst fierce competition, its paramount the airlines’ cabin class amenity offerings capture the consumer, along with their competitive prices.

As a result, we have seen the disparity between Business Class and First Class diminish. This can be said across all aspects of their offerings, most notably for the amenities gifted and the seating arrangements. Very few airlines now have first class suites, opting for a booth-like seat usually found in Business Class. As I mentioned earlier, there is no comprehensive formula for what determines each cabin class and no tick box checklist for airlines to adhere to. Some Business Class offerings have booths and bedding, others have a plush leather reclining chair with more leg room. There’s no rhyme or reason and, quite frankly, it’s a free for all for what the airlines fancy. How do I, as the paying customer know what I’m getting if American Airlines offers one thing, Etihad Airways another, and Lufthansa something completely different.

Nevertheless, with Business and First now engaged in an eternal thumb war, a no man’s land has opened up in the market in the last 25 years. Sounds like history repeating itself to me! With Business out of reach and Economy not quite delivering, airlines have slowly but surely introduced a new nebulous term for their passengers. Ta Daaa…Premium Economy! For those who want a little extra ‘something something’ but can’t afford the top business class tickets. It’s an age- old story on loop where we fill in the gap and a new one emerges. Like splatting worms at the fair, only to find out another one has popped up.

Don’t get me wrong, it’s a needed solution but the disparity across all airlines is vast. For the bulk of US Airlines Premium Economy equals more leg room, for other regions it can be anything from Economy with Bolt-On extras, to a comprehensive range of complimentary amenities, some even including branded cosmetics giving a taste of Business. Getting De Ja Vu?

With Economy and Premium Economy generating the majority of sales, the competition is on to provide the best offering on the market without encroaching on their Business Class big brother. Will airlines increase their budgets or will it be down to the supplier to provide the best solutions? And don’t forget with branding, comfort, budget etc. comes the ever-present goal of sustainability just to add an extra ingredient to the mix.

A number of airlines have introduced bedding offerings on-board their Premium Economy Service. Others are looking to redesign unused craft space below Economy and Premium Economy into booths with bunkbeds, much like a night train or hostel. The innovation and potential is astounding. However, as businesses cut their expenses, why wouldn’t they re-consider their travel costs, especially if there is the cheaper option with a slightly lower level of luxury but a sufficient level of comfort?

In the words of Tinnie Tempah, ‘I predict an earthquake up in here!’ with Business overthrowing the currently reigning First Class, Premium Economy creeping into the shoes of Business, and Economy Class staying put, like the odd sibling who inherited all the unfortunate genes.