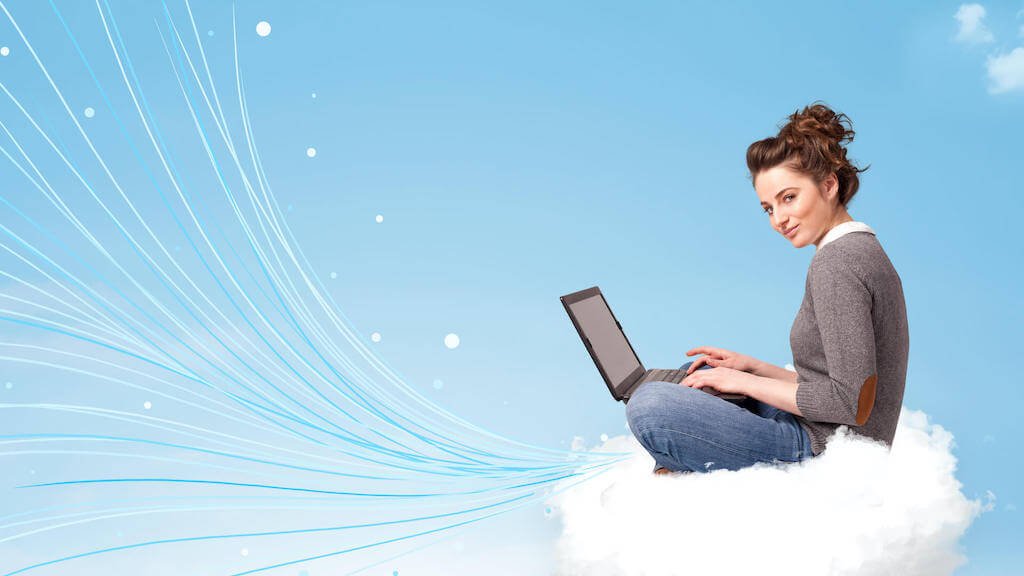 BBC World’s report found that up to 67% of frequent Business Class flyers would choose an airline based on their connectivity offerings whilst onboard, and the desire for Wi-Fi access increases as you move up the cabin classes. Airlines must provide passenger Wi-Fi onboard as an amenity similar to complimentary drinks, meals, sleepsuits and amenity kits!

As a freelance writer/actress, my working week can take me anywhere from Pinewood Studios to Elstree, London to America or, when I’m ‘resting’, the quaint local coffee shop where I live.

No two weeks are the same; which suits my overactive imagination down to the ground. However, there is one thing that this nomadic work life solely depends on. Mobile connectivity.

We are all creatures of habit, so imagine my horror when I decide to work at a different local coffee shop that has caught my eye, only to find that they do not have Wi-Fi! I hate to be dramatic, as it’s simply not in my nature, however in today’s technological landscape this is as debilitating as hypothetically losing a limb.

Connectivity has opened up communication channels, improved commerce and transformed modern culture. It’s no surprise that business travellers admittedly favour the promise of fast reliable Wi-Fi over that all-important good night’s sleep. As airlines rapidly evolve into hotels in the clouds, particularly for Business and First Class, why wouldn’t Wi-Fi onboard be a top priority too?

BBC World’s most recent findings in their Slipstream Report 2019, have found that up to 67% of frequent Business Class flyers would choose an airline based on their connectivity offerings whilst onboard, and the desire for Wi-Fi access increases as you move up the cabin classes. This, in part, is down to the demographics of those who upgrade their seats into Business and First Class. According to the BBC Slipstream Report, the ‘Focussed Workaholic’ demographic far outstrips the others with their thirst for onboard connectivity. This is not surprising, as it is these people who use their time on an aircraft as an opportunity to get more work done, to arrive at their destination ready for whatever meeting or project they are going into. However, they are not the only group that has a desire for access to the internet whilst travelling, other groups mentioned in the report include, ‘Switched On Multitaskers’, ‘Social Millennials’, ‘Traditional Lifestyle Travellers’, and ‘Entertainment Junkies’. It seems that this need is wide-spread – and, of course, getting wider as more and more devices require access to the internet to work to full capacity. But where did our desire to stay in touch at 38,000ft come from?

The idea of the internet and worldwide connectivity began in computer labs across Europe and the United States throughout the 1960s. However, in 1989 Tim Berner-Lee, a British computer scientist launched the World Wide Web, with the first web browser being released in 1990, and the first public use in 1991. Fast forward to the late 1990s and early 2000s and Wi-Fi technology was introduced to the public, and the appetite for staying connected 24 hours a day, 7 days a week became insatiable. These developments, in just 30 short years, have changed the way the world communicates, explores and does business, with many worldwide cities pledging to have complete Wi-Fi connectivity available at all times. For example, Boris Johnson, who was Mayor of London in May 2010 pledged that London would be completely connected by 2012. The final development in the Wi-Fi story, and arguably the one that has impacted travellers lives the most, is that of mobile data. The ability to connect to the internet wherever you are in the world has changed the face of society globally. It has allowed people of all ages to develop a thirst for information, to raise questions and have international conversations that have changed the world of politics, finance, culture and entertainment forever, and has created the ‘always on, always connected’ society. The technology landscape is such a rapidly evolving one, that it is difficult to extract trends and create forecasts. Thus, the insatiable demand for mobile data has caught even the most discerning of service providers off-guard. Network providers have had to accelerate the roll-out of 4G in order to meet these demands but even then, they are still on the back foot. 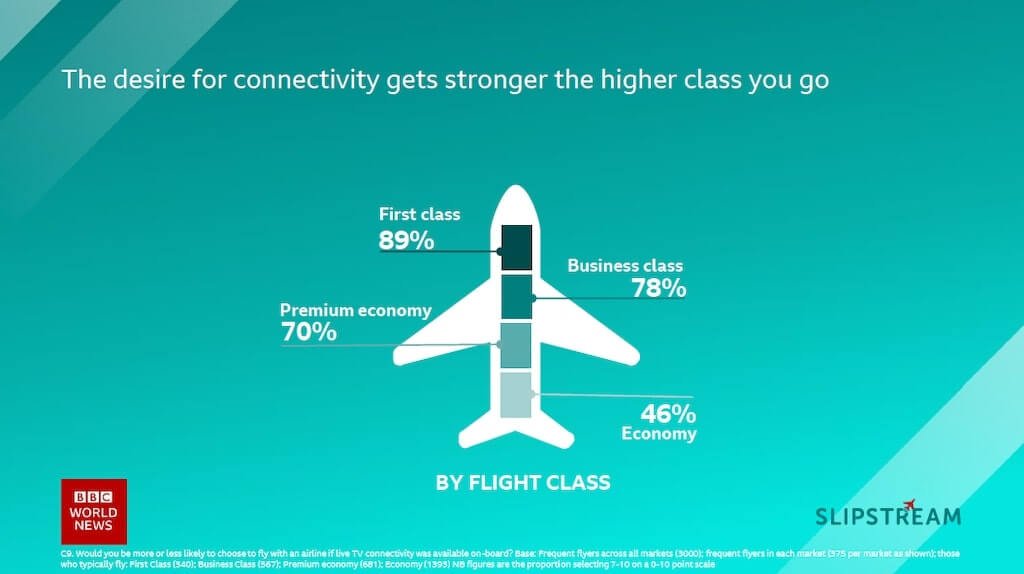 Desire for connectivity gets stronger the higher class you goSo, how can airlines harness this need and offer their passengers something that they really want whilst travelling the world? It has been proven that connectivity to the outside world whilst onboard really has an impact on the reputation of an airline, and so it would be futile for the aviation market to ignore this growing call. In a 2018 Inflight Connectivity Survey 78% of 9,300 respondents noted that Wi-Fi was “fundamental” to their lives and 55% agreed that the connectivity on the ground was as crucial in the skies, and key to improving passenger experience and driving passenger loyalty to an airline provider. Aside from reputation, according to the BBC Slipstream Report passengers would happily pay up to 20% more for an airline ticket that included guaranteed connectivity onboard, so airlines can’t afford not to develop the technology.

So, just offer Wi-Fi onboard, how hard can it be? Right? Unfortunately, as with all things technological, there are a number of stumbling blocks that airlines are facing. 74% of Business Class travellers in the 2018 Inflight Connectivity survey stated that the quality of the Wi-Fi offered onboard was key to their inflight experience. This has proven a challenge for the airlines, with demand onboard often far outstripping the capability of the Wi-Fi system. In 2016 American Airlines sued their inflight Wi-Fi provider, gogo which supplies to a number of other worldwide airlines over unreliable connectivity and faster speeds being offered by other providers. They also experienced issues with an inability to connect under 10,000 feet, and a bandwidth that was unable to support the number of passengers trying to connect.

However, it is certainly not all doom and gloom when it comes to onboard connectivity, and, according to the 2018 Routehappy Wi-Fi Report, 82 of the world’s airlines now offer some form of Wi-Fi onboard which states a 12% increase from their 2017 report of the same nature. Nearly half of all available seat miles now have at least a chance of Wi-Fi connectivity, a 10% increase from the year before. Three carriers now offer Wi-Fi on 100% of their flights: Icelandair, Southwest, and Virgin Atlantic, and a full 13 airlines offer Wi-Fi on 100% of their long-haul flights: Air Europa, Delta, Emirates and Etihad Eurowings, EVA Air, Iberia, Kuwait, Lufthansa, SAS, Scoot, United, and Virgin Atlantic.

The quality of connectivity is also improving, with Basic Wi-Fi continually losing out to Best Wi-Fi as airlines choice, though Better Wi-Fi still maintains as the most popular choice, currently covering 57% of available seat miles. However, there is a change in the air as airlines continue to upgrade their onboard connectivity options, and Best Wi-Fi is starting to gain ground representing 16% of available seat miles, which is up an incredible 129% from 2017.

The other challenge for airlines is how to monetise this need for constant connectivity. Providing inflight entertainment doesn’t come cheap, and with the addition of Wi-Fi the bills soon add up. It is a careful balancing act for them to ensure that their passengers are provided with what they need, whilst also keeping their costs competitive, in an increasingly budget-conscious world. A few leading airlines have already set up a subscription service for their frequent flyers. United Airlines’ subscription allows you to access one or more of the four internet providers for a month, or a year, dependent on the subscription that you have paid for. Emirates, similarly, have different grades of connectivity for their passengers.

They have created the ability for every passenger to stay connected via an online messaging service, or have 20MB for the first 2 hours of their flight. However, Emirates Skywards Members, their frequent flyer scheme, have the chance for discounted, or completely free Wi-Fi available for the duration of their flight dependent upon their membership tier. There is a branding battleground available for internet provider services, which may start to lower prices for airlines in a simple supply and demand situation. Global brands such as Panasonic are already in the airline market, with a number of others vying for position. This could be a benefit to the airlines, and the supplier brands, as with high-quality connectivity comes the ability to improve your brand reputation amongst a captive audience. For suppliers, this could be an opportunity to develop their global brands and extend their marketplace. This advertising opportunity may mean that airlines have a strong bargaining chip when it comes to doing deals with their internet providers.

There has been a lot of talk across the amenity marketplace for personalisation of amenities onboard, and Wi-Fi is no different. In the BBC Slipstream Report, respondents were asked ‘How would you prefer to pay for your inflight connectivity?’ and an overwhelming 60% said they would like it included as part of their ticket, with less than half (27%) saying they would rather pay for it separately onboard. Whether this is a psychological ‘value for money’ exercise or the fact that passengers don’t wish to be hassled buying ‘extras’ onboard, it seems clear that frequent travellers are more than happy to pay a little bit extra to allow them to continue to stay connected, whether for work or play whilst in the sky.

It seems that airlines have no choice but to continue to improve their inflight connectivity options. Passenger loyalty is increasingly dependent upon their ability to stay connected, and so airlines cannot afford to ignore the trend. The days of being able to switch off and enjoy a gin and tonic when travelling are now far behind us, with passengers saying their productivity can actually increase whilst onboard. Although the logistics are complicated, technology develops at such a rate that it is getting easier for airlines to give their passengers, of all ages, exactly what they want. Internet capability has continued to make the world a smaller place, for business and leisure. Connectivity onboard should be seen as the next leading amenity for passengers, similar to their slippers, eye-masks and cosmetics already offered. In fact, some might argue that passengers would rather have free Wi-Fi than a free toothbrush. 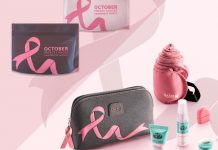 October 23, 2020
As an all female led team at Amenities this is a cause that’s very close to all our hearts and it’s great to see... 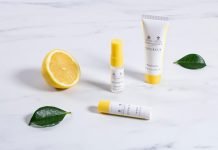 October 5, 2020
Singapore Airlines believe personalised service is all in the details, which is why they have chosen to partner with renowned British perfumers Penhaligon’s for...

AMENITIES, the magazine for everyone with a passion for designing and delivering the best onboard passenger amenity kits and sleeper suits. We promise to show you the world on onboard amenities through the eye of the passengers, designers and industry experts. AMENITIES Magazine stay’s true to exploring the ethos of traveler indulgence through design.
Contact us: hello@amenitiesmagazine.com

© Website by DADD - Design And Digital Development
We use cookies to ensure that we give you the best experience on our website. If you continue to use this site we will assume that you are happy with it.OkPrivacy policy