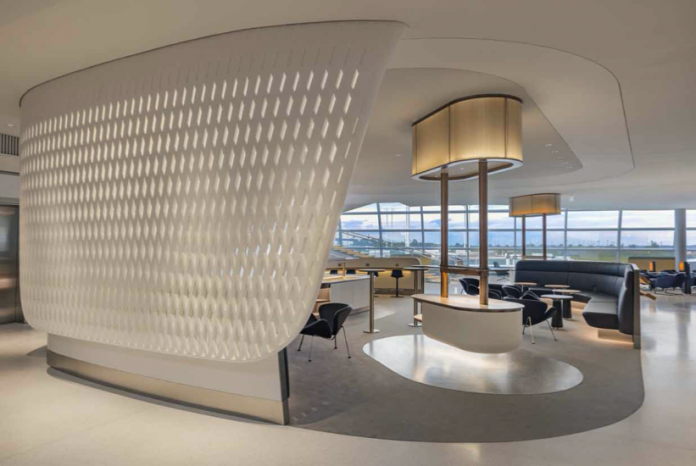 Positioned between two of the terminal’s jetties, this new 3,000m2 space, the fruit of a collaboration with Groupe ADP, contributes to the overall renewal of the airport.

‘There is something magical, extraordinary about the act of flying, of rising up into the air among the clouds. A fantasy made possible since the end of the 18th century thanks to genius inventors the likes of the Montgolfier brothers or the Wright brothers. At a time when the technology is no longer the question and planes are again taking off, when the world is resuming its dizzying pace, perhaps more than ever we need islands of calm in this ocean of speed.* For the Air France lounge we wanted to suspend time, and in the best possible way to prepare travelers who are getting ready to fly off. The intention was to work around ideas of levitation, lightness, a sense of escape, for an airline company with a glamorous image, symbol of French elegance.’ Sanjit Manku and Patrick Jouin

The Lobby / The Wing: The entrance, a footbridge, is designed as a gentle transition leading into the lobby. The eye is immediately caught by a kinetic sculpture that hangs down from the ceiling, echoing the curve of an airplane wing. 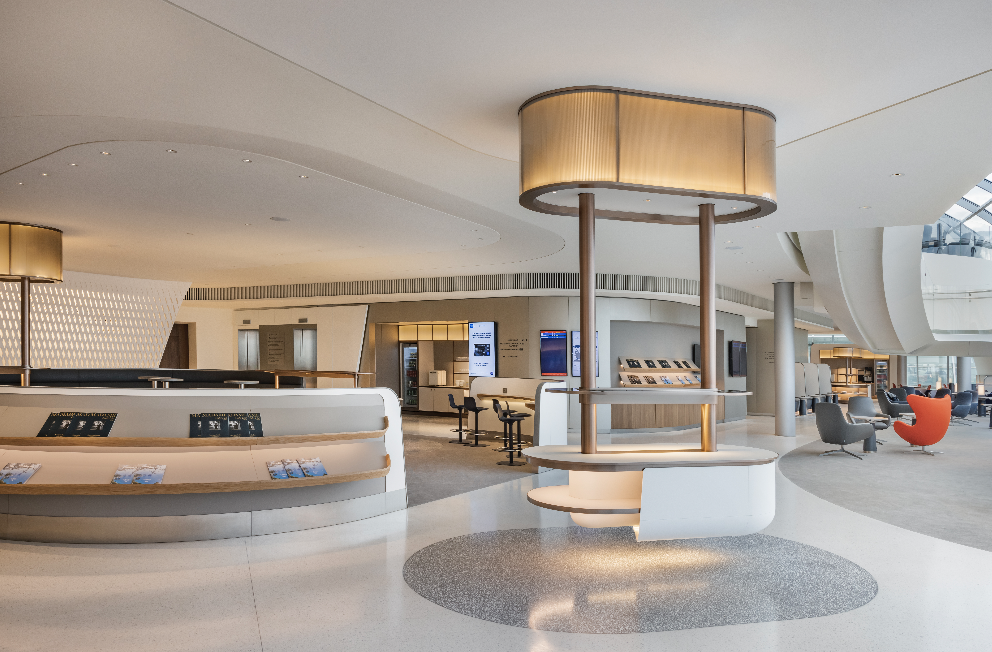 As the viewpoint changes, so the wing discretely reveals the atmosphere of the lounge. The rhythm slows, the voyage begins. On the left, the Air France reception and its welcoming staff to look after any last-minute details; all that’s left is to pass through to the other side.

The Runway eye: Behind the wing, the ground floor of the lounge is spacious and clear to understand. It is easy to move around, find your way and settle in. At the centre, the ‘warm heart’ radiates, epicentre of activity with its booths for food and refreshments and seating designed for exchange. 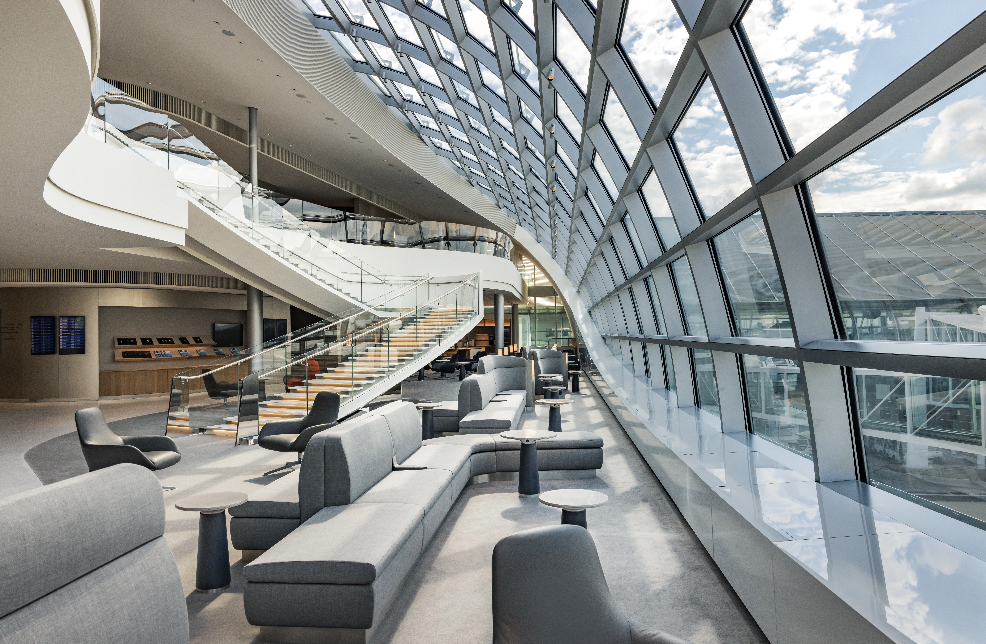 On the edges, set back from the flow of circulation, are more private areas for relaxation. Thanks to a simple and intuitive colour coding system using the Air France colours, passengers are unconsciously guided. Red for areas of movement and refreshments, blue for calm, with hushed spaces and gentle lighting.

Relaxation and refreshments: On either side of the central island that rises through both levels, large, semi-circular banquettes form lounge areas that are conducive to relaxation but also to conversation. They are separated by diaphanous screens in fabric of a slightly irregular weave, giving a rhythm and gentle poetry to the space. meanwhile, smaller alcoves create a more pronounced break between the social area and the more private spaces. 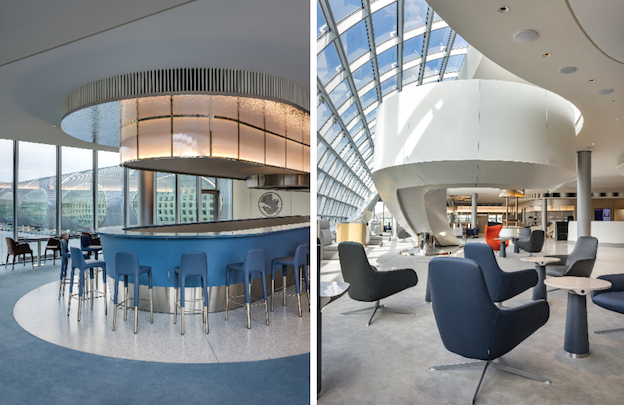 Made to measure, the wool-covered banquettes provide a deep seat and generous backrest. in the same spirit, the leather armchairs designed by Patrick Jouin for Ligne roset embrace users in their enveloping frame, while their legs, drawn in a single line, accentuate the idea of floating. Connected side tables provide for recharging electronic devices by means of an induction system.

Switch off / Freshen up: Upstairs, near the Clarins Travel Spa and away from the hustle and bustle, large, comfortable chaises longues are dispersed and the lighting softened, to give those travellers with a bit more time the possibility to switch off completely. Nearby, a large bathroom offers ten shower rooms.

The bathroom is decorated in contrast with the rest of the lounge, in dark, marine tones and lighting that imitates light glistening on water. At the centre, a large timber bench is surrounded by the individual bathroom capsules in gleaming white. An invigorating contrast, and particular care was given to each detail, including in the toilets, where above the hand basins rise huge mirrors screen-printed with a sea of clouds in the background.